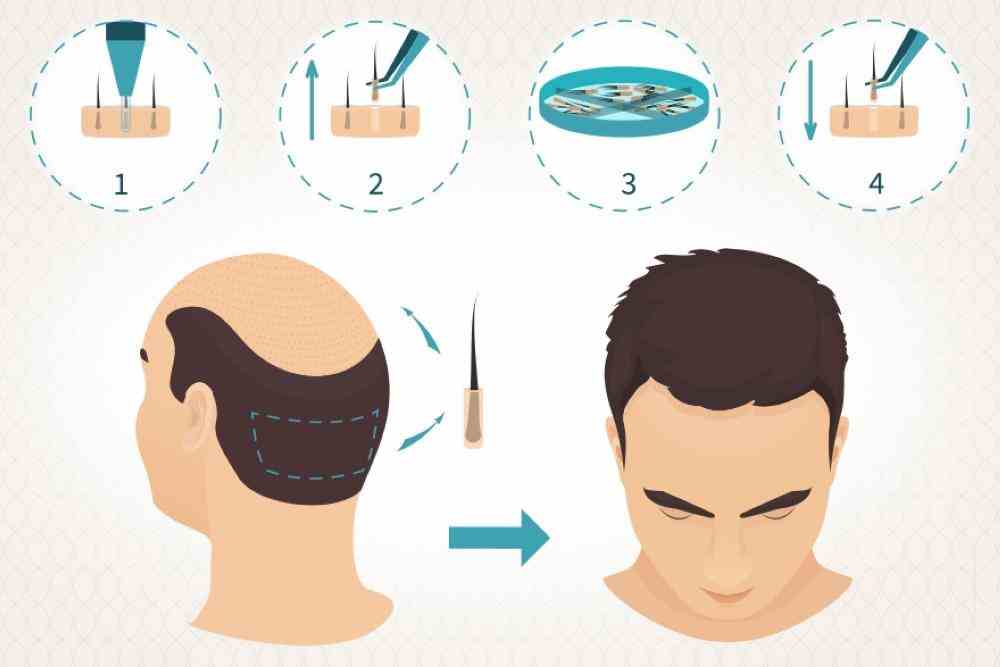 Hair transplantation is a wonderful technique that appeared many years ago. However, there were many defects in it, and after a period of time the technology was able to add a distinctive touch to it to make it one of the most successful methods used in hair transplantation, which is the method of picking that works on hair transplantation in a 100% natural way, by taking a quantity of hair from another area in The head is pulled by a device that distributes it in the areas of the spaces that need natural hair so that the appearance appears in the end with the appearance of the hair naturally, as it continues to grow naturally, as the hair bulb is pulled from the roots and planted in the place of voids and baldness.

How is hair transplantation used?

This is the first way to slide:

This method is one of the traditional methods that were used in the past, but there are many defects in it, that after removing the slice from an area where there is a density of hair, the area is re-sewed after surgery, which leads to leaving a scar and an inappropriate appearance for the person who cannot control In the hairstyle appropriate to his personality, or change the hairstyle or haircut permanently, because it will show the scar clearly, undistinguished and inappropriate, and the area from which the hair is taken must be opened and the entire slice removed from the skin of the human head, and then the surgery is closed, these methods were in In the past, with the advancement of technology, new methods appeared, which is the method of hair transplantation.

This type was not used in the past, but has been used in the past few years, as the technology was able to provide a new, easy and very simple technique in hair transplantation, which is the method of picking, because it is a quick and distinctive method because the methods of picking do not need a scalpel, skin removal or surgery until the hair is removed from the The other area, such as the way the chip is used, but this method is used in very easy ways, through a device that captures

How is natural hair transplantation done?

Where hair is transplanted through natural methods and no scalpel is used in it, first all the devices and the place are sterilized, and then a specific number of separate areas are taken where there are thick hair so that the person does not feel that the area has been taken from large quantities of hair and then is sterilized And entering the follicle in a device to keep the hair roots alive, and after the completion of picking up all the hair follicles that we need to compensate for the other area in which there are spaces and baldness, and after hair transplantation with the roots, the hair is fixed in the place where the hair was transplanted with natural materials through the doctor who implements this type of The operations, and a doctor with high experience and skill in hair transplantation must be chosen, and the place must also be sterilized well.

What are the steps of hair transplantation in the pick-up method?

First : The place where the hair transplantation is performed is well sterilized, then the doctor performs the hair transplant process and determines the area except through which the hair is transplanted in it, and then he draws and design a new front line for the hair, and then an agreement is made with the patient to shave the hair in the area that is performed. The follicles are removed from the roots and then transferred to the area completely devoid of hair, and only topical anesthesia is used, because the extraction does not use general anesthesia at all, but there are some patients and in rare cases, general anesthesia can be used, all of this is according to the doctor’s choice of the appropriate anesthesia for each case.

Then the hair follicles are removed with a device that picks up the hairs from the roots and they appear in the form of units, each unit consisting of 1 to 4 hairs, because this is their natural form in which they appear at the back of the head and we do not divide them after the extraction and they will also grow after that. shape and in the same place.

The operation team then uses the Unit Extraction (FUE) device, which pulls one hair from its roots with the bulb and transfers it to another place where there are many baldness and voids, and it is implanted directly in the desired part, and then very small holes are made in the part where the bulb was transplanted In it, the number of which ranges from hundreds to thousands of follicles, and this type of operation is relatively long, because the hair follicles are transplanted one by one, and one of the most important results of this process is that the transplanted follicles appear and germinate within several months after the operation, where the hair appears after This is in the place where the follicles were transplanted after a month or two and it returns to the front of the head again. During a period of 6 to 9 months, the hair grows completely to take its natural length and increase in density, and then the person can cut and control the hair in a way that suits his freedom.

After the doctor performs the hair transplantation process in the previously identified areas, where the hair is then transplanted in the natural direction of the hair that differs in each area of the scalp. After hair transplantation, the patient needs to use some treatments for a period of one week, which are topical antibiotics and tablets that help to hide the effects of the operation completely after a week of hair transplantation until the hair appears 100% natural.

What are the advantages of hair transplant picking?

One of the amazing advantages of FUE hair transplant is that it is a very simple and easy method, unlike other traditional methods that require a scalpel and a complete surgery and removal of a large part of the hair skin. The method of extraction does not cause any kind of scars or the appearance of the human head inappropriately, but rather it works on transplanting hair from the roots in the area

In which there is baldness and large spaces, which happens to re-grow it naturally and the hair can be cut naturally and grow again like what happens in normal hair, because picking is only a natural method through which a group of tufts and roots of hair is taken in an area where there is It has thick hair and hair transplantation again in an area where there is no hair and large voids and baldness appear in the person’s head.

Are there drawbacks to hair transplant picking?

There are no defects that have appeared so far in FUE hair transplant, but on the contrary, it is characterized by that it then helps to restore the hair growth cycle naturally, because the hair is transplanted from the roots and this means when moving to another place it grows naturally without any complications or symptoms Sideways, but the hair transplant with the slide has many drawbacks, which is the removal of a large layer of skin through a scalpel, which requires surgery and stitching after that, where the shape of the head appears completely inappropriate and the person cannot control the hairstyle that suits his shape, because it will leave a scar It is not suitable for the shape of the head and causes a lot of critical situations, but hair transplantation by FUE completely eliminated all the defects and side effects, because it does not cause any scars to appear or open the skin of the head and remove the slice, but a large group of hair is picked up in different scattered places in the area where it is located Thick hair, so as not to notice that a large amount of hair tufts were pulled in this area, and then hair is transplanted into the baldness area and the spaces until it grows again within several months.

No bloody bleeding can occur, but it will happen during hair removal from the area from which the follicles are taken, very simple wounds that are hidden through antiseptic materials and cotton.

What are the causes of hair loss and how is it maintained after hair transplantation:

Among the reasons that cause hair loss and the emergence of baldness and voids in men and women are genetic reasons, as this disease can be inherited from the father or grandfather, or not taking important vitamins that nourish hair, as well as the frequent use of thermal methods used in hairdressing, such as irons, hair dryers and creams. The individual that leads to the weakening of the hair follicle from the roots, which happens to reduce the growth of the hair follicle and not to appear again, and anemia in women resulting from pregnancy and blood loss during the menstrual cycle also helps to fall hair and expose hair for long periods to water or vice versa such as not using water And the use of some medications that help a person to calm down from nervousness and tension lead to hair loss.

After the FUE, patients should take important vitamins to nourish the hair so that the strength of the hair follicles is maintained.

Avoid the heat used in hair styling and straightening, such as irons and hair dryers, and use them within limits.

Use natural shampoos that nourish hair, and stay away as much as possible from industrial products that contain a lot of chemicals.