at is Arm Lift?

Excess skin on the underside of the upper arms and on the inside of the upper legs is often the result of a pregnancy, an extreme weight loss or aging. An arm lift, also known as brachioplasty, and respectively a thigh lift can be the solution for a loss of skin elasticity or excess skin.

The arm lift is a standard surgical procedure mainly performed for aesthetic reasons. This surgery takes two hours and is done under general anaesthesia.
An arm lift procedure involves excess skin removal, mostly on the inside of the upper arm, making the skin tighter again. An arm lift is often combined with a liposculpture , a procedure where subcutaneous fatty tissue is taken away.

Is Arm Lift for me?

If the underside of your upper arms are sagging or appear loose and full due to excess skin, this procedure may be right for you. Thin people may also have sagging upper arms due to the effects of prior weight loss, aging and genetics. 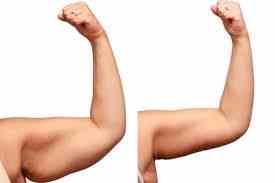 Even regular exercise and strength training cannot get rid of excess sagging skin in this area; exercise can tone and tighten muscles but can not tighten skin.

To make the scar as least noticeable as possible, excess skin is removed on the inside of the upper arm. So the scar usually goes from the armpit to the elbow and it can be reddish and knobby during the first few months. A year after the arm lift the scars will fade and become smoother. Till then, the scar needs to be protected against the sun. 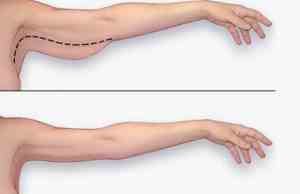 The results of arm lift surgery will be long-lasting, provided that you maintain a stable weight and general fitness. As your body ages, it is natural to lose some firmness in your arms, but most of your improvement from surgery should be relatively permanent.